I should preface this by saying this is not a video I or anyone in my family created. It is merely footage from Groningen, Netherlands, in the 1923 that the Dutch Institute of Sound and Vision more recently uploaded to YouTube. I found it interesting to watch, since my family lived there during that time. It gave me some perspective (for instance, many people got around by foot or on bicycles), so I thought it would be good to post here.

These are another couple finds from the box my uncle Philip Siersema lent me to scan — actual calling cards from the 1920s! They belonged to Klaas Siersema and Helena de Wit. Apparently, they were stored in a little envelope, so they’re still in pretty good condition. Kind of a cool little piece of history. 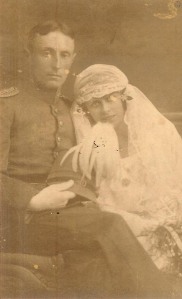 The photo above is a medium to heavily retouched scan of the wedding portrait for Klaas Siersema and Helena “Lenie” Frederika de Wit in 1923. Sadly, it seems as though when a marriage ends people tend to take less care of the proof it ever happened (See the thumbnail version of the original photo to the right  to see what I’m talking about — although, I guess it is also fair to note the photo has survived nearly 90 years and moving from the Netherlands to Canada to the United States).

A friend and genealogy enthusiast I met through the Ancestry.com message boards was able to track down their wedding certificate on FamilySearch.org, but that organization claims the copyright to all its scans so I cannot post it here. Luckily, my friend, Jan Brul, knows both Dutch and English and graciously translated the text (Note: He admits his English is not the best, so please be aware this is a rough translation, even though I’ve cleaned it up where I could.):

“On the twenty-eighth August, nineteen-hundred twenty-three, are for me

Civil servant of the registration of the county ‘s-Hertogenbosch appeared

For the purpose of getting married. The banns were without protest here registered on Saturday the fourth of August last and in Venlo on Saturday the eleventh of August next. The mother of the groom and the parents of the bride, here present, have declared that they agree with this marriage.

The future spouses have for me and in the presence of witnesses declared that they each other will accept as spouses and will do all duties required by marriage. So in the name of the law, I have declared that they are united in matrimony. This marriage is declared in the presence of the witness Leendert Vlasbloem, office worker, age thirty-nine years, living in Rotterdam, Nicholaas Gerardus Petrus van Reenen, office worker, age fifty-two years, living in Utrecht, relatives by marriage in the second and third degree of the first spouse. This record is read for the appeared parties and witnesses. The civil servant of the civil registration.”

The actual ceremony took place in the Netherlands Reformed Church in ‘s-Hertogenbosch, where Lenie’s father Dirk was an active and high-standing member.

I find the witnesses particularly interesting. Leendert was married to Klaas’ sister, Leentje, and they had a daughter named Ada who was close with my grandfather (Klaas and Lenie’s son) growing up, but I have no idea what happened to her. It makes sense that he would be a witness. But as for Nicholaas, I have never heard or seen his name, so I am even more curious to know how he comes into the picture.

Here is what their wedding invitations looked like (the paper is thick and watermarked):

This is a lightly retouched wedding portrait of my great-grandparents, Louise Lopes-Cardozo and Cornelis Kool, who were married on the 15th of September, 1926, in Amsterdam, North Holland, Netherlands.

As a side note, my mother, Joy-Anne Siersema, has worn the cameo necklace Louise is wearing in this photo every day for just about as long as I can remember.

Tonny Siersema was born Antony Dirk Siersema on the 15th of November, 1927, in Blerick, Limberg, Netherlands, to Klaas Siersema and Helena de Wit. He was their second son, and lived only a short while, passing away from an illness on the 8th of January, 1929 in Venlo, according to a digital record on Genlias.nl. He was 2.

This is one of the most beautiful and well-preserved photographs of any that I’ve come across in my research. I would place this portrait of a young Johan Siersema and his mother Helena de Wit at about 1926, since it appears that his brother Tony had not yet been born (otherwise, I would expect him to be in the picture) and she isn’t showing — although, that could be due to 1920s fashion as well as a thin stature otherwise.

To the right is the obituary for Dirk, who was my great-great-grandfather. It’s a clipping that Helena saved from an unknown newspaper, and, interestingly, it is written quite differently from how obituaries are written nowadays. Obituaries are so standard now that I never really gave much thought to how they used to be written. Since the clip is written in Dutch, I pasted a slightly paraphrased version of the Google translation below:

“A highly regarded and meritorious townsman is gone from us and received by death. At the age of 53 years, Mr. Dirk de Wit, teacher of Tot Nut van het Algemeen, has died. The deceased served education in an exemplary way — nothing was too much to do in the interest of his students — and he was held in high esteem by students and their parents.

Mr. de Wit was no stranger to the public and society, serving on many committees — especially the Dutch Reformed Church, which loses in him a most zealous and religious member. In this church, he held prominent positions. He was a member of the church council, secretary treasurer of the Board of Deacons and administer prelate of the church.

Furthermore, the deceased was the founding president of the church choir, Excelsior, and the long-time president of Our Covenant, which he resigned from recently due to health reasons. Also in the charitable realm, Mr. de Wit was very active and recently was appointed a member of the Board of Directors for the Arms Council [a charitable organization that helped poor people with relief, medical care, etc.].

A serious illness recently attacked his strong constitution, and though it was an incurable malady, nobody expected that death would so soon put an end to the life of this hard worker, who had acquired many friends.

May he rest in peace.”

Helena also kept a clipping of the article following his burial, with the headline “Impressive Funeral”:

This clip talks about some of the same things the obituary did, but also about the fanfare of his funeral. A copy and paste version of the Google Translate with frequent tweaking and paraphrasing (because, let’s face it, Google Translate doesn’t work awesomely with nearly 90-year-old wording) is below:

“Impressive Funeral
Mr. Dirk de Wit was buried here this morning at the Protestant cemetery.When the body, covered with a wealth of flowers, was brought to the cemetery, groups of students and former students of the Nutschool system gathered at the gates. Also in attendance were the elders and deacons of the Dutch Reformed Church, teachers of Nutschool, the church choir Excelsior, a deputation of Our Covenant, and very many other interested parties.

After the coffin was lowered into the ground, Ds. W. Meindersma, president of the church council, spoke first. He thanked the deceased for everything he’d lectured as an interested and compassionate member that could not be missed more. Also on behalf of the college of deacons, of which he was an accountant, he thanked him.

Scr. said he did not to want to talk about what has been, but he posed the question: What will he be now?

Memoreerend Longfellow spoke about the deceased’s faith and how he has a new journey now that will take him to his final post, where he might be closer to God. He also said how those left behind should remember the teachings Dirk shared with them.

Scr. took leave with the wish that once everyone left the proceedings, they would still have the word of the deceased in their hearts and that it will continue to resound.

Mr. J. Eisma then spoke on behalf of the school board and pointed out how the board had always been pleased over the years by the deceased and had taken note of the results of the education given by him.

Furthermore, he thanked the deceased for everything he has done for the Dutch Reformed Church, saying it would be difficult to find a replacement because there are few people who so selflessly undertake and fulfill their duties.

‘The 20 years he has almost never failed at the school, because he knew no minor ailments. Even when in the beginning of this year disease wrecked his strength, he kept coming as long as it was possible. Thus his has become an example of the greatest duty. By his students, he was loved for his great cheerfulness, which he knew to awaken their faith. For each, he was a loyal colleague and a best friend and his work will live until the end of time.’

Mr. H. van den Last, director of the church choir, Excelsior, outlined the work of the deceased president, noting that all attempts in his work suggested the highest levels possible to implement.

Scr. expressed the hope that his spirit will remain among the living, so that always justice will remain.

Mr. F. Meulbroek spoke on behalf of Our Covenant. Afterwards, Excelsior sang a harmonized “Above the Stars” in French.

A relative spoke last and a psalm was read. All were deeply impressed.”

Here’s a link to a performance of “Boven de Sterren” [Above the Stars] on YouTube.com.

And here’s another newspaper article and death notice for Dirk de Wit that I found after the initial publishing of this  post: END_OF_DOCUMENT_TOKEN_TO_BE_REPLACED

This is one of my favorite things that I found in the box from my grandmother’s house. At first I thought it was just a cute drawing, but then I looked closer and realized the woman and man pictured are my great-grandparents, Klaas Siersema and Helena de Wit.

At the time of this drawing, Lenie lived in s’Hertogenbosch [s’Bosch] and would have been just 18. Klaas was a lieutenant in the military, and from the wording, I am guessing he was stationed in Venlo, which would make sense since that’s where they lived together after they were married the following year.

Anyway, I just thought this was a sweet depiction of long-distance love in the 1920s. Lenie’s parents used letters in their long-distance courtship, and my generation uses Skype and the like. It’s interesting to see the evolution there.