This is one of those classic photos that will come in handy when my sister and I try to convince my niece that, yes, people did use to sit in big wood and metal contraptions and make horses pull them around — that’s where we get the term “horsepower.”

In the photo (dated August, 1908), my great-great-grandfather Freerk Belling Swalve (born in Bohmerwald, Prussia, in 1855) is driving a horse-drawn carriage with at least one passenger aboard. He would have been 53 years old, and this photo likely would have been taken in the Netherlands.

As with most of the photos I post here, I did some retouching in Photoshop (that’s a disclaimer for the purists). This one was riddled with scratches, dirt, and tears, but it didn’t turn out too bad. I felt that this was a good time to post the photo, given that I confirmed the other day that the man was, indeed, Freerk.

I hope you enjoyed seeing how people got around about 100 years go!

Freerk Bellinga Swalve, was born in Bohmerwald, Prussia, in 1855. He would have been about 35 years old in this photo, estimated to have been taken around 1880. (Willem Vlietstra/Contributed)

This is an exciting moment — the first photo mystery that has been solved on this blog! And it’s all thanks to Willem Vlietstra, who sent me some late-1800s photos of the Swalves last week. Among the photos was the one above of Freerk Bellinga Swalve (taken around 1880), as well as one of Helena Catrina Koster in the thumbnail to the right.

If you remember in our second Mystery Photo Series post, I was thinking that the older gentleman in the group photo was Freerk and that the woman next to him might have been his wife Helena. However, since receiving the photos from Willem, I now have the answers to both those speculations. As it turns out, I was half right, and also half wrong.

The gentleman is most certainly Freerk, but the woman (unknown ancestor No. 2 in the photo below) is definitely not Helena. So possibly a sister instead, since she does have those light-colored eyes? Well, she is one of my new mysteries, as she is in many photos with Freerk, but remains unidentified. As with most answers I find in my genealogy research, more questions always arise. You can expect the next Mystery Photo Series post to be all about her. 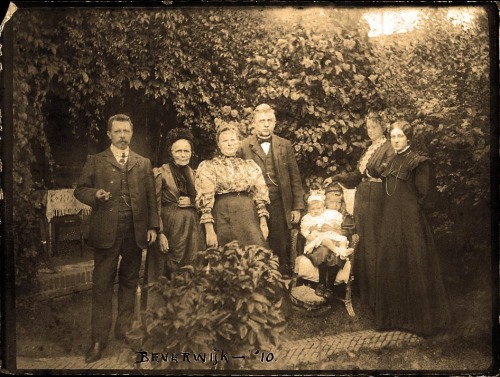 UPDATED SEPT. 20, 2012: These are postcards sent from my great-great-great-grandfather Freerk Bellinga Swalve to his only daughter, Wubbina, in the early 1900s. Originally, there was one more in this collection, but it was removed after my cousin, Anje Belmon read over them (she know Dutch) and determined that one was actually from an aunt. As for the rest, Anje says, “Most of what is written is about small illnesses, and wishes that things will be better soon, so they can visit each other.” Which, of course, sounds exactly like something a father would write to his daughter.

Hint: Click on the images to make them bigger.